My last true Auntie, Tippie Atkinson, had died in 2007. I lost touch with her  many years ago but I did miss my wonderful Aunt. She was 94!

Auntie Tippie was an amazing woman for her time. She married a Speedway Rider, Arthur Atkinson in the 1930's and went on to promote  manage and run West Ham Speedway in London, which in those days was as popular as football is today. A glamorous, high powered and unlikely occupation for a woman at that time. It would be like a woman running Manchester United Football team today and she would possibly do a better job.

Tippie Thorpe was the third of my grandfather's daughters. My mother Honey Thorpe being the fourth. As with all middle class children of that age they were shipped off to boarding school in Belgium and left there for years. It must have been daunting for them both and I know my mother never recoverd. At sometime my Aunt lost an eye but she never let it bother her all her life.

Tippie was most impressive and fiesty. She could be quite forceful if displeased as I found out when I was three! I bit her daughter who though the same age was much bigger than I and would never let me pass on the stairs. This bite caused a family uproar as it was Xmas 1946. Tippie was furious with me packed up her family went home to Southend taking the turkey with her. You can imagine the scene. One family Christmas dinner all set to go and no turkey! My grandmother took three years to forgive her but I suppose even at three I was to blame. I still feel guilty.

Tippie and Arthur were well off by my family standards. Arthur owned a munitions factory in the war and did well. They had  big houses, mink coats, Jaguar cars and world cruises to Australia when the rest of us were on rations but my Auntie was just so nice it didn't seem to matter to me. Think it did to my mother. Living in a semi detached in Stanmore on nothing and watching your sister cruising around the world leading the life of a Movie Star could not have been easy.

Once in M&S I desperately wanted a Mohair Stole like my cousin and Auntie Tip would have bought it for me but my mother's pride did not allow. I shall always remember her kindness that day. When  I was 8 my grandmother died  AuntieTippie could not bring herself to go to the funeral so we sat alone together in the strange Indian Room at my grandfather's home  and she talked  to me seriously and treated me like an adult. It was the first time anyone in my  family had done so. That's what I liked about Auntie Tip, she alone in my family treated me as an adult and not as a silly little girl.

Later Auntie Tippie put on fabulous Christmas parties, real glass balls on the Christmas trees and real pork. Her family had to do without bacon for a whole year to save the rations and I feel sure she saw to it that my Xmas presents were on par with her own children as Mummy and Daddy could never have run to it.

Auntie Tippie showed the 1930's world what a woman can do given the chance! She ran a top class Speedway club for years. I loved watching her putting on the events and she and Uncle Arthur once took me in their Jaguar to Bristol to watch Uncle Arthur ride. I was about eight and it was such an adventure for me. She did not even seem to mind me being sick in the car!

Here is a gorgeous picture of them both when young and in love to remember them by! It was taken by my father and I think it is just so young and fresh and shows something of her enjoyment of life.

Tippie was worth much more than with which she has been  credited. Had she been a man with an education who knows what she might have achieved. I  am proud to be her neice.

Posted by Janette Miller's Strange Life at 19:45 No comments:

The Secrets of the Upwardly Mobile Victorians


All families have secrets! Mine was no exception as both the Millers and the Thorpes were upwardly mobile in a big way. They had risen into the middle classes and the Thorpes epecailly were only too pleased to leave their working class relations behind in the slums of Manchester. Unpleasantly Pop and Ma Thorpe just simply dumped them and no one in the family knew either their names or from whence they came. They never imagined that anyone would find out. I did!

I always knew that I didn't belong to the upper middle classes. I was never at ease with any of them. I realised I was considered Trade and Trade was not what any well bred middle class man would look for in a wife. However to my astonishment my very top draw Oxford educated GP husband Miles Wakefield Castelhow Heffernan did.  I never got to meet his Irish gentleman farmer father Dr Patrick Heffernan. Miles wisely waited until he died before proposing.

I did have to meet his mother Winifred Wakefield Heffernan who was a great lady. No woman would have been classy enough to marry  her son and she made it quite clear that she was the real thing when it came to class and I was rather young and perhaps too pretty and she could overlook the Trade.

Winifred or Mume said she was related to Sir Edward Gibbon Wakefield who colonized Wellington, New Zealand. She was oh so proud of him, so much so that I had to give my daughter his name. Miles too always wanted to live in New Zealand because of this connection and in fact eventually we did.We met a grand niece of the great man, Miss Irma O'Conner and as she was a single lady with few friends I was able to befriend her as she badly needed a family. She and I searched her family tree but could find not a sign of these Wakefields.

The Spicer Paper connection was equally well favoured. It appears that Mume's grandmother was a Mary Spicer of the Spicer Paper Maufacturers and were rich beyond belief. I was even taken to the paper mill in Enshem outside Oxford. In truth Richard Wakefield was a rich paper merchant as can be see above in the very Victorian photo of him sitting outside his family home in Bridge Street East Molesey, Kingston on Thames. 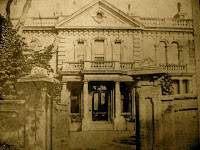 Mume liked everything just so and I was hard pressed to come up to standard In fact I never think I never  did. I did get a bit concerned when she insisted that the milk in tea went in first!  This was a no, no in our household as it was in most upper middle class homes but I put it down to eccentricity.

Somehow I inherited the old Wakefield family wills as well as every spare chair that Miles's brother did not want. After Miles died I spent some time working out the family tree but still I had no idea who the Spicers and the Wakefields were. The wills looked oh so grand. Then along came Genes Reunited and all was revealed. What a surprise!

Mume was no more a grand lady than I was! In fact it was worse than my family. The fact that Richard Wakefield, Mume's father was a paper merchant who married a Mary Spicer was a coincidence of names for Mume's grandmother was of very humble birth. Sarah Spicer hailed from a seafaring family from Folkestone whose mother had had 22 children and practically single handedly populated Kent.

Richard Wakefield married Emma Hill who was ten years older than he and after four children  and a huge amount of upward mobility, she died. Mume was not one of the four children!

This is where the secret of the Wakefield /Heffernan's arises for after his first wife's death Richard Wakefield. at the rip old age of 70 moved to Hove with his housekeeper Hannah Walker who had been the maid to his first wife Emma. There he fathered a child with her and did the right thing and married her. Winifred Wakefield Heffernan, the great upper middle class lady, was the daughter of a housemaid! Nothing to be ashamed of as it is thought the Queen Mum had a similar parentage.

Mume's housekeeper mother became the lady of the house. It did not last long for Richard Wakefield died just five years later leaving a five year old daughter whom he adored. His other children were furious and their father just cut them out of his will leaving everything to his young daughter. Her brothers and sisters were not amused and have disappeared in history.

Her mother, Hannah, saw to it that Mume was educated and bought up to be a fine young lady, sending her to a very swish Swiss Finishing School and Mume was married off to a 44 year old elderly Irish doctor from County Tipperary. It was not the happiest of marriages. Mume and he lived on the fortune for the rest of their lives and their sons were oblivious to the fact that although they appeared top drawer the truth was slightly less. The Spicer and Gibbon Wakefield connections being nothing but dreams!


I am, like Mume proud of Richard Wakefield. He was as clever and astute as my own grandparents. However he too left his poor relations behind. His mother Sarah Spicer ended up a widow in London clawing a living by beading chairs. I have one! It is now very valuable as beading is rare today. The census reveals all the secrets.

I had no need to feel ashamed of my Miller/Thorpe families because the Wakfield/Heffernans were just the same.